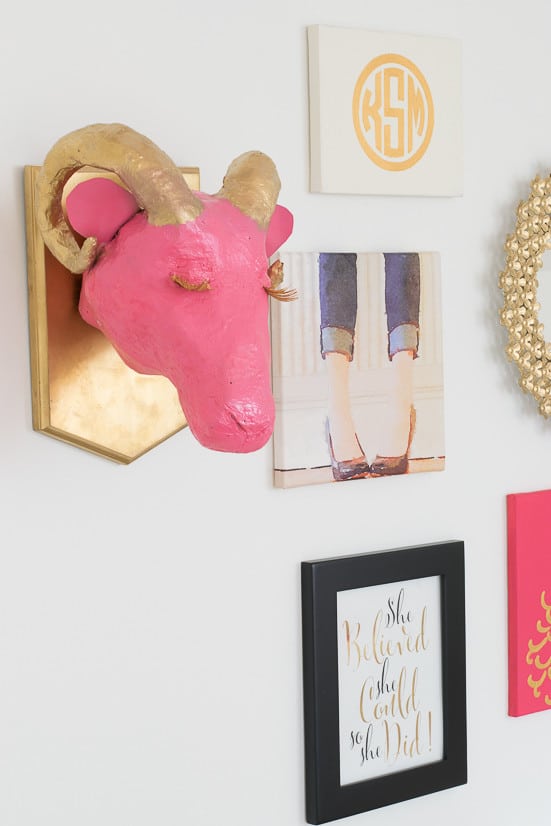 With the progression of posts featuring the redecorating of Kate’s room, you are getting a  glimpse into the quagmire that the projects in my world seem to fall into from time to time.  Kate and I started re-doing her room 6 weeks ago…and I’m still plugging away.  Truthfully, we accomplished a good deal when she was home for Christmas, but there were still some ‘to-do’s’ on my list.  This paper maché ram trophy head is the last element of the gallery wall that Kate wanted.  The ram head is significant as a Ram (Ramses) is her school mascot.

Me:  “What are you thinking in terms of art for your walls?”

Kate: “I’d like a gallery wall, with lots of pictures, some quotes and a ram trophy head.”

Kate: “Yeah, you know…not a real ram trophy head, but one made out of cardboard or paper mache.”

Kate:  “do you think you could make one?”

I have to say that I haven’t really worked with paper mache since I left elementary school…a few years ago!  But I really enjoyed this project!

Not only is it fun to get your hands all goopy, but you can actually form something with nothing more than newspaper, flour and water and most importantly…it is a very forgiving craft.  If you make a mistake (which I did several times) you can easily mend it.

After Ram(shes) was all done and ready to be hung, she fell off of the counter and cracked in several places.  I merely whipped up a wee batch of water and flour, ripped a couple strips of newspaper and voila…she was easily mended.

Oh, and let’s get this right out in the open…yes, I know Rams are male.  But I’ve claimed some artistic license here and made our Ramses a Ramshes. Freddy Mercury Ram? or Boy George Ram? or Bruce Jenner Ram?  Matters not…this is a Glam Ram.

What you need to make a paper mache ram trophy head (or other animal trophy head):

How you make a paper mache ram trophy head (or other animal trophy head):

‘Oh, la, la’….Ramshes, the Glam Ram is the bling that made Kate’s gallery wall sparkle.

Ramshes, the pink paper mache ram trophy head absolutely perfects and finishes Kate’s gallery wall.  I am so glad she thought of it.  I have to say that the gold glitter eyelashes really make her a complete knock-out in my book.

If you want to make sure you don’t miss future content, pop your email in the beige box up on the right or the greenish/bluish bar at the very top of the page.  I usually send out 2-3 emails a week, so I won’t inundate your inbox.

Thanks again for spending a few minutes of your busy day with me today.

Please know that I welcome each and every comment that comes my way. If you want to make sure you don’t miss future content, pop your email in the beige box up on the right or click here.  I usually send out 2-3 emails a week, so I won’t inundate your inbox…believe me, I’m sensitive to an overflowing email inbox!

By subscribing to Nourish and Nestle, we will only use your email address to send you emails (no more than 2-3 per week) that will keep you up to date with the latest news and content on the site.  In addition, you will have access to my growing library of knit & crochet patterns, as well as other printables.  This library will continue to grow, so check back often.

And please know that you can unsubscribe at any time by emailing me or clicking on the “unsubscribe” link at the bottom of all of our emails.

So, if you’d like to get in on the ‘subscriber benefit’ action, simply subscribe to Nourish and Nestle here or using the form on the right sidebar. It’s towards the top a bit. I have sent all my subscribers the link to the Subscriber Benefits Library. If you missed it or misplaced it, drop me a line.