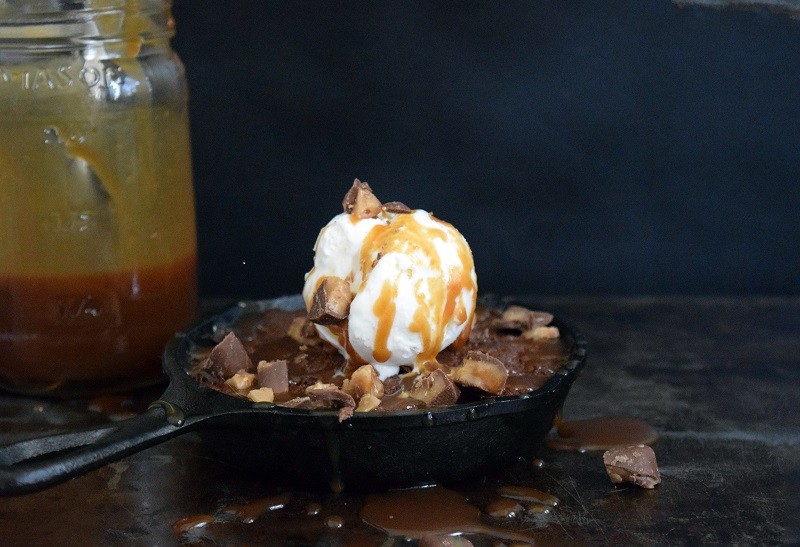 For the past 20 years, a favorite family dessert has been brownie sundaes with hard toffee and caramel sauce.  My husband and brother-in-law ask for this dessert at every opportunity.  The recipe morphed over the years from a specific printed recipe that I think I got out of Bon Appetit.

Baking pan brownie sundae has morphed into a skillet brownie sundae by baking them in individual 5-inch cast iron skillets.  I can’t quite put my finger on why, but baking them in the individual skillets really takes them up a notch.  I think it’s because the brownies stay warmer longer and you get the wee bit of crunchier crust all the way around each brownie.

Some of these are affiliate links and I will earn a small commission off of the sale of these products, but the price you are charged is not affected. You can see my full disclosure policy here.

Having a very moist brownie bump up against that crunchy crust in just about every bite…um…yeah. I’ve been looking for these individual skillets for some time now and they’re not the easiest to find, in my neck of the woods anyway. In addition to using them for a skillet brownie sundae, I’d like to use them for individual berry/fruit cobblers, as well as egg dishes. I plan to use them a lot.  I ended up finding them online at Amazon (surprise!). I bought  Lodge H5MS Heat Enhanced and Seasoned Cast Iron Mini Skillet, 5-Inch – Pack of 4

I typically use heath bars for my toffee, but you could make your own toffee or use other brands (I’ve used Werther’s before with great success).  My grocery store doesn’t carry the Bits o’ Brickle Heath Bar bits (like chocolate chips, but toffee instead), but I wish they did.  It would make this recipe just that much easier.  Instead, I put the toffee candy in a pan, cover it with a cloth and played whack-a-mole with my meat pounder.  And can we take just a minute and talk about caramel sauce?  There’s caramel sauce and then there’s CARAMEL SAUCE!

Like most things, store bought caramel sauce can’t hold a candle to homemade caramel sauce.  And it’s a fun thing to make…a little science experiment-y with the burning sugar and the bubbling cream.  The recipe I use is from’s Martha Stewart’s Living cookbook and it’s really easy.  The only problem with it is that I could, and have, eaten a big spoonful of it…by itself…just to make sure it was O.K.

For Caramel Sauce (The Martha Steward Living Cookbook, recipe cut in half)

And while apple pie has earned the title of ‘the All-American’ dessert and a place at everyone’s 4th of July picnic, I think a case can be made that a skillet brownie sundae with toffee bits, topped with ice cream and smothered with caramel sauce is every bit as patriotic.  Just my thoughts.

Thanks for stopping by to visit today, I appreciate you more than you’ll ever know. And when you leave a comment…ah, it makes my heart sing!

So, if you’d like to get in on the ‘subscriber benefit’ action, simply subscribe to Nourish and Nestle using the form on the right sidebar. It’s towards the top a bit. Or, you can subscribe by clicking the box right below. I have sent all my subscribers the link to the Subscriber Benefits Library, but if you missed it or misplaced it, drop me a line.