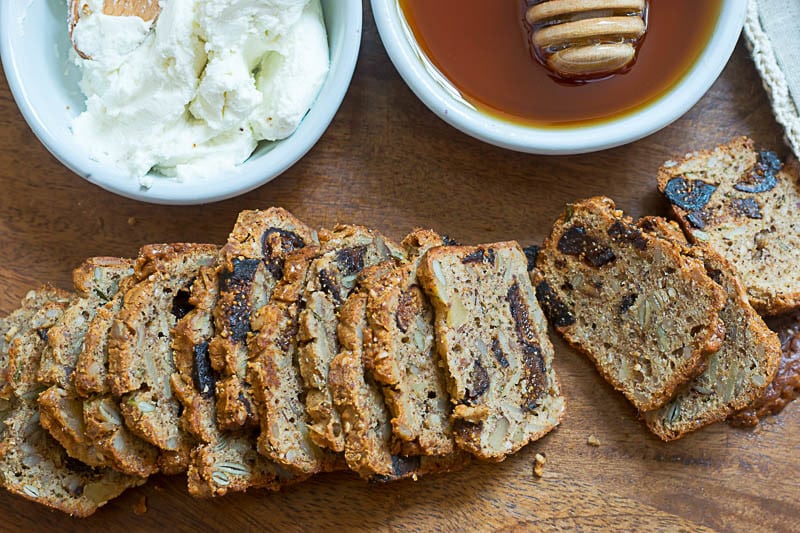 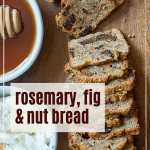 A recipe for Rosemary, Fig and Nut Bread. This homemade, gluten free bread recipe is perfect for snacking as is or for serving with your favorite cheeses. A relatively low carb bread recipe, especially outstanding with goat cheese & honey.

Don’t you love it when an idea comes out as well as you had hoped?  I wanted a homemade bread recipe, savory and barely sweet, that I could use for everyday snacking, as well as a gluten-free, low carb alternative to crackers on my cheese board.  Whether you crave Rosemary Bread, Fig Bread or Nut Bread, this Rosemary, Fig and Nut Bread recipe is all that and more! In truth, it is the best gluten-free bread that I’ve ever tasted and I think you will think so too!

In scouring the internet for a suitable homemade bread recipe, I, of course, landed upon Elana’s Pantry and her Cranberry Almond Bread.

I was intrigued by the fact that her bread recipe contained ZERO grains…the base of the bread being almond butter. YES!

YAY!! Since I happened to have an unopened jar of almond butter, I set to finessing this delightful bread recipe to suit what I had in my mind.

And booyah! The end product was just as I had hoped.

A gluten-free bread recipe that just barely sweet from the figs and toothsome from the added rosemary.  The nuts, seed and almond butter give this Rosemary, Fig and Nut Bread recipe a delightful texture that paired perfectly with the soft and creamy goat cheese I had in mind. (Are you starting to drool just a wee bit?) and a relatively low carb bread recipe to boot!

And then…top the whole thing with a drizzle of honey and you have the PERFECT appetizer, snack or breakfast treat.

Can you freeze this Gluten Free Bread?

YES! In fact, I freeze the just-baked loaves and then cut them later to toast them into crackers – a great gluten-free snack relatively low in carbs.

This Rosemary, Fig and Nut Bread recipe whips up fairly quickly and can also be made in advance and frozen.

Some of these links may be affiliate links and I may earn a small commission off of the sale of these products, but the price you are charged is not affected. You can see my full disclosure policy here.

I used my grandmother’s 40+year-old food slicer, similar to this one,  to slice the semi-frozen homemade bread loaves into even slices. I toasted some of the slices, which made them less chewy.  My hubby preferred the Rosemary, Fig and Nut Bread recipe toasted, while I preferred it not toasted.

While the world may be divided along political lines, I think we can all come together and agree that the combination of gluten-free homemade bread, goat cheese, honey, and rosemary is probably one of the greatest combinations…EVER! In fact, if we all just consumed a regular dose of the combination, I’m pretty sure that harmony would envelop the planet. Agreed? I’ll do my part…like right now!

As an Amazon Associate and member of other affiliate programs, I earn from qualifying purchases.

Did you make this recipe?

This bread pairs so well with many things, but our favorite way to enjoy it is with a dollop of jam. Some of our favorite jams to pair with this bread are:

And while I’m pushing the whole goat cheese + honey thing right now, let me just say that a shmear of  Brie wouldn’t be so bad either…or heck, just about any cheese would pair well with this delicious homemade bread.

If you want to give this gluten-free bread recipe with Rosemary, Fig, and Nuts a whirl, then be sure to bookmark this page or pin the following image.

Please know that I welcome each and every comment that comes my way. If you want to make sure you don’t miss future content, pop your email in the beige box up on the right or click here.  I usually send out 2-3 emails a week, so I won’t inundate your inbox…believe me, I’m sensitive to an overflowing email inbox!

By subscribing to Nourish and Nestle, we will only use your email address to send you emails (no more than 2-3 per week) that will keep you up to date with the latest news and content on the site. And please know that you can unsubscribe at any time by emailing me or clicking on the “unsubscribe” link at the bottom of all of our emails. In addition, you will have access to my growing library of knit & crochet patterns, as well as other printables.  This library will continue to grow, so check back often.

Printables and knit patterns are available to all of my subscribers in the Subscriber Benefits Library.  I will continue to add patterns and printables to this page as we go along.

You can also access all the products I referred to in all of my posts on my brand new Nourish and Nestle page on Amazon. You can access it here.

So, if you’d like to get in on the ‘subscriber benefit’ action, simply subscribe to Nourish and Nestle here or using the form on the right sidebar. It’s towards the top a bit. I have sent all my subscribers the link to the Subscriber Benefits Library, but if you missed it or misplaced it, drop me a line.